Hornets are almost twice as big as a wasp or honeybee. A simple trick is to think of a 1 euro coin. Hornets are always bigger than the coin.

The thorax is the part of the body between the head and the abdomen on which the legs and wings are attached. In Asian hornets, the upperside of the thorax is entirely black, whereas European hornets have red-brown markings on a dark background. The red-brown color extends to the top of the head. The black thorax of other wasp species (common yellowjacket, German yellowjacket) almost always has clear yellow stripes or dots.

On the left: Median wasp queen, red-brown legs with some yellow pigmentation seen, (c) Michel Garin. On the right: the distinct black legs with yellows tips of the Asian hornet, (c) Warre-SG.

Difference between male and female

The male has a truncated abdomen, with a notch that shows a pair of yellow spots on the underneath side of the abdomen which females do not have. On the other hand, a female has finely punctate abdomen, which sometimes show the sting. Females have a sting, males do not. In addition, the male antennae are longer and more curved than those of a female. The antennae of males consist of 13 segments that are serrated, while a female has only 12 segments.

Picture 1: a male with a truncated abdomen. Picture 2: a male with a notch that shows a pair of yellow spots on the underneath side of the abdomen (showed by the yellow circles). Picture 3: a female with a finely punctate abdomen, which sometimes show the sting.

Recognition of the queen

In autumn, the queen of the colony can easily be distinguished from her workers. Inside the colony, the laying queen can be recognized by her distended abdomen, the fading orange colour, less hair on the thorax and, at the end of the season, damaged wings. On the other hand, the morphological differences between workers and potential future queens are barely visible to the naked eye. As the future queens store fat reserves for the winter, they are heavier than the workers. 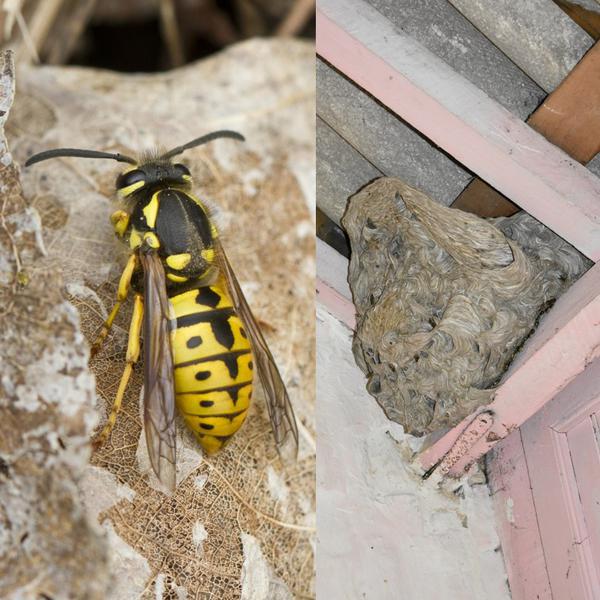 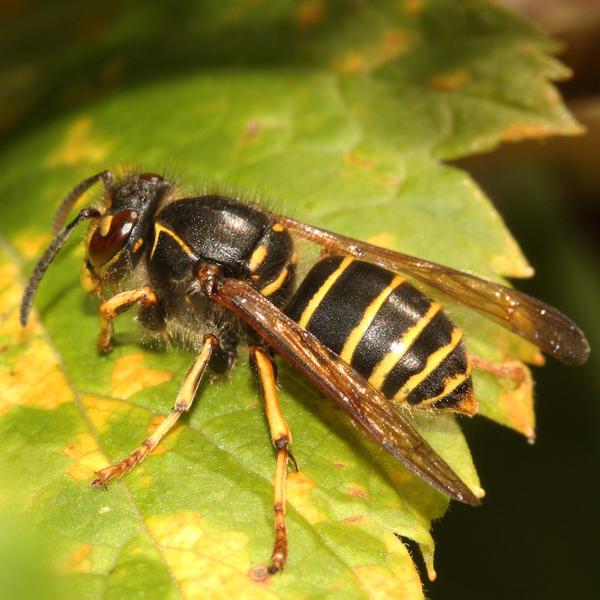 Size
Half the size of a hornet.
Color
The abdomen is alternately striped with fine yellow and wide black stripes. The legs are more yellow than with Asian hornet. Thorax is black with a yellow, hooked lateral line. In addition to this dark a lighter form exists that resembles common and German yellowjacket.
Nest
Often unprotected in a tree, below 10 meters. The nest looks like an inverted drop with the bottom tapering. The hole is at the bottom, never on the side. Casing is sloppy and pale brown to gray.
Distinctive feature
Abdomen alternately yellow and black. 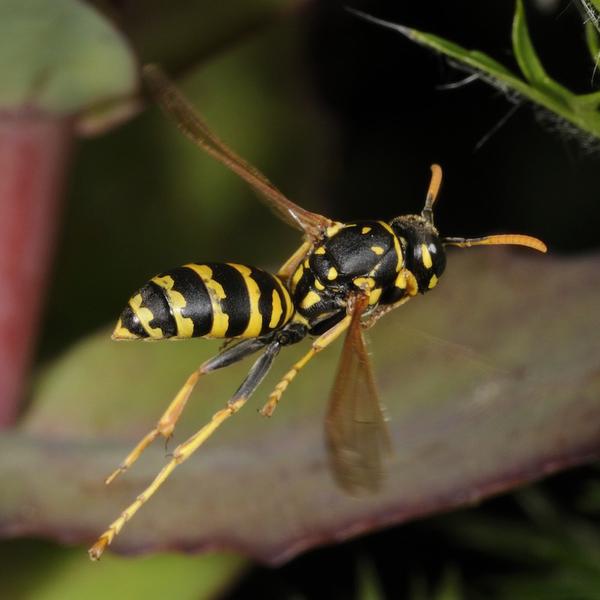 Size
Slightly larger than a bee, but smaller and especially slimmer than a hornet.
Color
The abdomen is alternately yellow and black. The long legs are more yellow and are left hanging in flight. Thorax black with a yellow collar and some finer yellow dots.
Nest
Small nests without sheath. Usually in sheltered locations.
Distinctive feature
Slender wasp species. 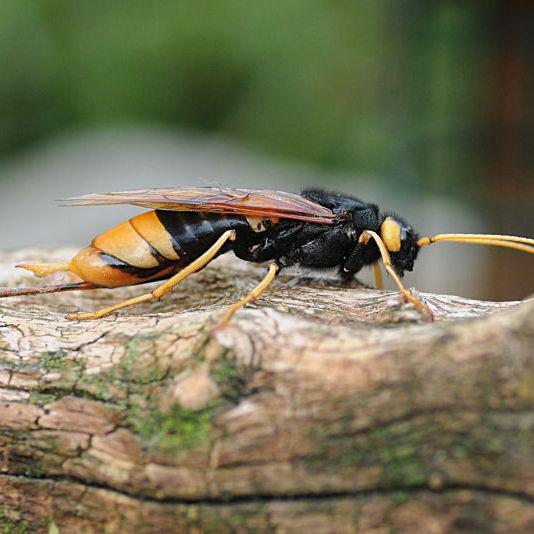 Size
A completely harmless wood wasp that does not wear a sting and is the size of an Asian hornet, often remarkably slim.
Color
Abdomen more yellow than black, same for the legs. Antennae yellow, Asian hornet has black antennae. Two large yellow spots (facet eyes) on the front of the head (dark in Asian hornet).
Behavior
Often found on wood.
Distinctive feature
Projecting ovipositor at the back of the body, yellow antennae. 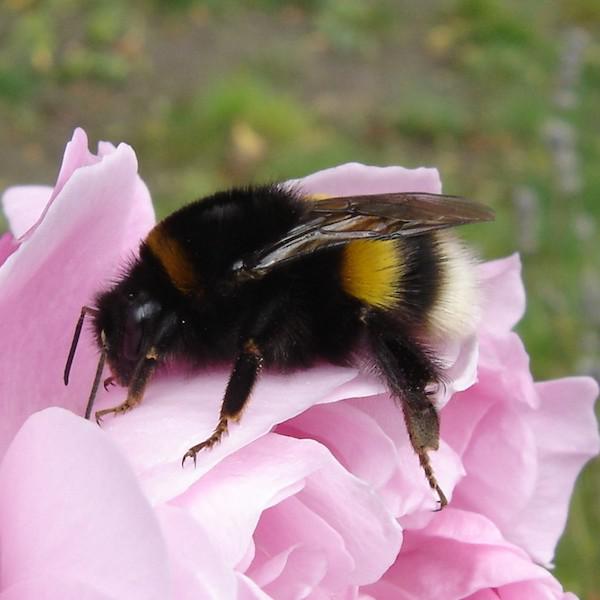 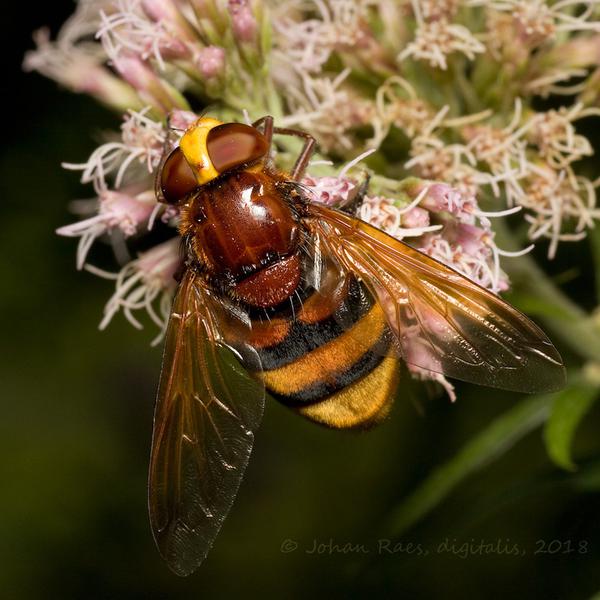 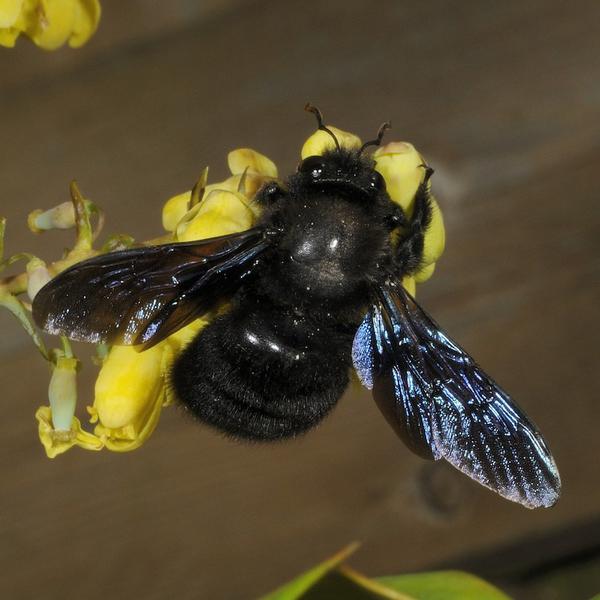 Asian hornets build two types of nests: a small primary nest in spring and a larger secondary nest as from summer. In 70% of the cases, the colony will move from primary to secondary nest. The two nest types differ in location and size. Regardless the type, the color of the nest is always light brown as it is made up of dead wood fiber. Asian hornets prefer to nest in urban areas where a lot of food can be found. Nests are usually found close to habitation (in gardens, parks, city edges) or in the countryside. In areas with intensive agriculture, relatively little food can be found for the hornets.

From April to June, Asian hornets build their spring nest. This nest is always spherical and located in a sheltered place protected from rain and wind: inside a shed, a porch, a garden shed or a wood shed, in an attic or under the roof of a carport. Spring nests are usually attached to a horizontal base such as a ceiling. Their color is light brown and the size varies between a tennis ball and a small football. The entrance of the nest is at the bottom. The early nest stage, in which the nest is no bigger than a tennis ball, is difficult to distinguish from European hornets or other wasps. The primary nests are often in the vicinity of water.

Left: a young primary nest of Vespa velutina attached to a ceiling (diameter: 8 cm). Right: a more developed primary nest in a shed. Both nests are build in a covered place and look similar to the nests of other wasp species.

Large summer nests in a treetop

In summer the colony can move to a nearby location. In this case, a secondary nest or summer nest is produced. Most summer nests are built in a treetop higher than 10 meters. They only become visible when the leafs fall in autumn. Other places where summer nests can be built are hedges, barns, sheds, under a roof overflow or against a façade. Sometimes the hornets do not move and they turn the spring nest into a summer nest. Summer nests are bulbous to pear-shaped. They are light brown in color and are on average 50 cm (up to 90 cm) wide. The entrance of the nest is on the side.

Two summernests on the same location as the primary nests. The fly entrance is on the side. Note on the left picture hornets are running on top of the nest (distinct black dots). The wasps can react very agressively when coming close to the nest. Always keep a save distance of at least 5 meters. 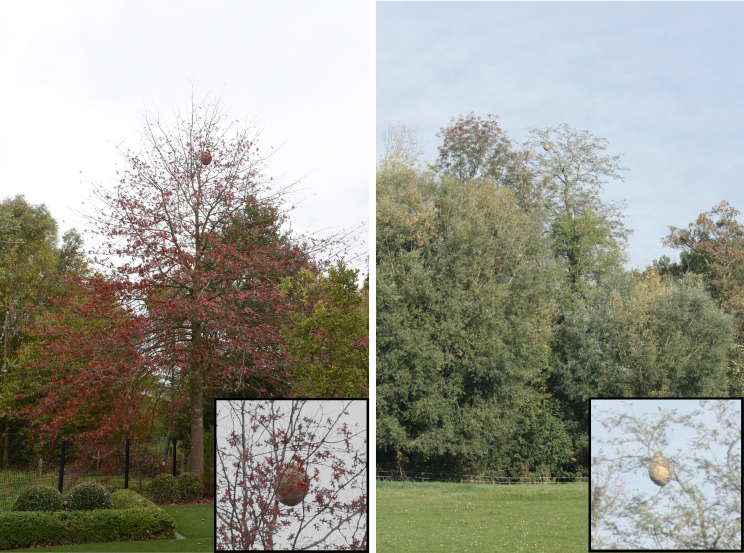 In trees you can sometimes find other structures that resemble an Asian hornet nest. Especially larger nests of magpies, crows or pigeons, which breed in treetops, can cause confusion. A bird’s nest is sloppily built and consists of separate twigs. As a result, from a distance, the contours of the nest are not as smooth as a wasp nest. Bird nests are also very dark in color. Wasp nests are light brown and are less noticeable.

Mistletoe (Viscum album) is a semi-parasite of deciduous trees. Canada poplar is the main host. A mistletoe in a treetop can be confused with the nest of the Asian hornet. Like bird nests, mistletoe is darker and more striking than wasp nests. In Flanders, mistletoe mainly occurs in the south of the provinces Brabant and Limburg (eastern loam region).

A large deformation of a tree trunk or branch as a result of a fungus or bacterial infection is known as a tree cancer. This usually occurs in the lower parts of the tree, close to the trunk. Tree cancers are less common in the treetop. Also fungi (tinder fungus) can grow on a tree and easily be confused as a hornet nest.

Mistletoe (left), bird’s nests (centre) or tree cancers (right) can be confused with nests of Asian hornets. They are usually dark, bowl-like structures that are visible from a distance in the tree top.